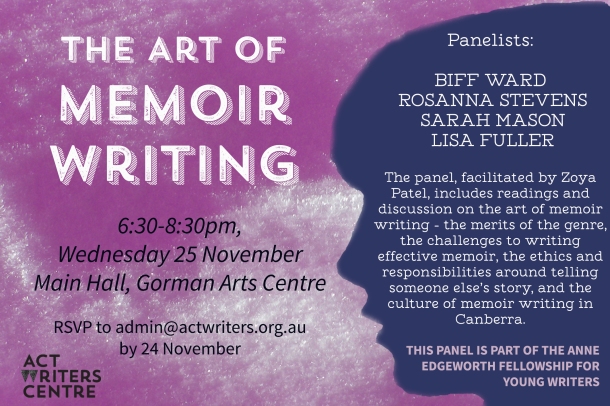 Join us at 6:30-8:30pm on Wednesday 25 November for a night of readings and discussion on the art of memoir writing at Main Hall, Gorman Arts Centre. Our speakers, Biff Ward, Rosanna Stevens, Sarah Mason and Lisa Fuller will discuss the merits of the genre, the challenges to writing effective memoir, the ethics and responsibilities around telling someone else’s story, and the culture of memoir writing in Canberra. The discussion will be facilitated by Zoya Patel.

This panel is part of the 2015 Anne Edgeworth Fellowship.

Biff Ward is the author of the literary memoir, In My Mother’s Hands, which was short-listed for the NSW Premier’s Douglas Stewart Literary Prize for nonfiction 2015, longlisted for The Stella Prize 2015 and winner of the Canberra Critics’ Circle Award 2014 for nonfiction. In 1984, her ground-breaking book, Father-Daughter Rape, one of the first in the world about child sexual abuse, was published in the UK and the US.

Rosanna Stevens is a fiction and nonfiction writer whose work has appeared in The Big Issue, The Lifted Brow, The Griffith Review and The Believer. She’s currently researching a novel about whiteness and a collection of essays about menstruation.

Sarah Mason is a writer, teacher and  film-producer; she is represented by Literary Agents Curtis Brown and has written 1.75 books and many articles. Sarah has written for Lip Magazine, HerCanberra, Bands Music Action (BMA) Magazine, Curio and has recently been invited to become a contributor for blog, Mamamia. Sarah has also been published in several poetry anthologies including Eve’s Harvest published by Odyssey Books. Sarah is passionate about human relationships, film-making, comfortable shoes and peppermint tea.

Lisa Fuller is a Wuilli Wuilli woman, also descended from Wakka Wakka and Gurang Gurang mobs, from Eidsvold, Queensland. With over five years’ experience in publishing, she attended the Residential Editorial Program in 2014, and was a joint winner of the 2014 Anne Edgeworth Fellowship. An emerging writer, she has had some poetry and a short story published in Etchings Indigenous: Treaty (2011), and By Close of Business (2013), an anthology created by the Canberra-based Indigenous Australian writers group, Us Mob Writing (UMW).

Zoya Patel founded Feminartsy in 2014, following four years as Editor-In-Chief of Lip Magazine. She has been writing about feminist issues since the age of 15, and has had work published in a number of publications. Zoya has worked with rip publishing, You Are Here Festival, and the National Young Writers’ Festival, and was one of the editors of Seizure‘s Viva la Novella 3 prize. She is a joint recipient of the 2014 Anne Edgeworth Fellowship, was short-listed for the 2015 Scribe Nonfiction Prize for Young Writers, and was named 2015 ACT Young Woman of the Year. She tweets at @zoyajpatel.

We hope to see you there!