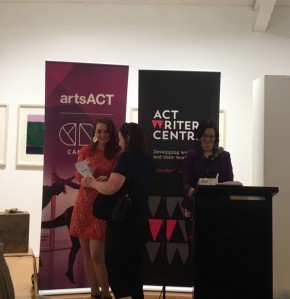 Canberra’s writing community gathered last night for the most highly anticipated event of the literary calendar ─ the ACT Writers Centre’s Christmas party and awards night.  The event took place at Canberra Contemporary Art Space at Gorman Arts Centre. The large crowd enjoyed the exhibitions on show, along with live music by Will Campbell and a captivating poetry performance from Merlinda Bobis.

We were thrilled to be joined by the ACT Minister for the Arts and Community Events, Gordon Ramsay, as he announced the winner of the 2017 ACT Book of the Year. The 2017 winner is Tom Griffiths for The Art of Time Travel  and highly commended was awarded to Kim Mahood for Position Doubtful. Further information on the ACT Book of the Year can be found in the Minister’s official release, HERE.

The ACT Writers Centre annual awards include the ACT Writing and Publishing Award, the Marjorie Graber-McInnis Short Story Award, the June Shenfield Poetry Award, and the Anne Edgeworth Fellowship for Young Writers. This year’s winners and highly commended awardees are:

Winner: ‘What do we want: The story of protest in Australia’ by Clive Hamilton

Winner: ‘The Last Day Before Snow’, edited by Carmel Summers

Highly Commended: ‘For all the Veronicas (The Dog Who Staid) by Andrew Galan

Highly Commended: ‘The Uses of a Shark’ by Damen O’Brien

Congratulations to our 2017 winners, and a sincere thanks to all who entered.  Thank you to our esteemed judges across the award categories. We also thank our award supporters: Harry Hartog Booksellers, Eden Road Wines and the Canberra Contemporary Art Space. Thank you also to Arts ACT and Gorman and Ainslie Arts Centres for your continuing support.

One thought on “2017 ACT Writing and Publishing Awards”