Have you ever thought about writing games? Maurice Suckling has worked on over 40 published video games, and answered some questions about how to get started, the industry, and how games writing varies from other forms of writing.

HANNAH: How did you first break into writing games?

MAURICE: I was writing – comedy and copywriting – and a friend I was at university with had a brother who had a development studio – they were making what would become Driver, an open-world driving game for the PlayStation, and they needed a writer – they wanted to add a story to it to help stitch the game design ideas together. There weren’t really established game writers back then, it was all so new. But I was a writer, and I did have a lifelong interest in games, and even designed my own board games and wargames, so I was about as qualified as anyone back then. They booked my time for two weeks. I ended up working at that studio for several years. More games work spiraled out of that.

H: What is the process for writing a game?

Over the years writers have been hired late, giving rise to complications[.]

But this has been changing in more recent years, with writers working in-house from early in development, helping to fix many of the issues arising from late writer attachment.

One notable exception in my own career has been the Planet of the Apes: Last Frontier, where there were no in-house writers, but we were all external and hired right at the very beginning of the project, almost before any of the rest of the team, so the script was absolutely shaping the experience the development team were setting out to create. This game is fundamentally a story-led experience (perhaps it’s not even a game, but an ‘interactive story’) so it makes perfect sense that the script/characters/narrative design elements were leading the development process.

Regardless – once a writer, or a writing team, is hired the process is all about trying to figure out what needs doing, and what time and resources there are to try and do it, and figuring out how to be flexible so the creative response can be shaped around what you and your co-writers discover along the way, and how to be resilient to ensure you don’t lose coherency through a mess of voices and disciplines trying to conform to a production schedule which almost certainly won’t bend.

H: What is the main difference between the narrative director for a game and other writers?

M: It depends on the studio and how they do things. At 2K Australia (RIP) the narrative director functioned as a team lead and producer dedicated to the writing department – helping to shape schedules and workloads, as well as giving sign off on internal targets. The narrative director also represented the team in other meetings – with production, art, design, and audio leads, but also in meetings with the publishers 2K, and with Gearbox, the license holders and the other studio who we were working with, or needed to get approvals from.

So – in short – more responsibility, but maybe also more opportunity to instill a project with – and inspire others with – a creative vision.

H: In some games the storyline feels more important than others. Is this something that is reflected in the development process? For instance, would more resources be put into the writers for a game like Mafia III as opposed to the story modes that have appeared in sports games like NBA 2K over the past few years?

M: Yes – as you say, some games are primarily about stories, others more tangentially so.

In general, yes, those games that are primarily about stories will have considerably more resources than others – with their own dedicated narrative teams, perhaps with as many as a dozen writers, perhaps even more, when external writers are taken into account and all the NPC dialogue that needs to be written to help cater for open-world games.

As with POTA: Last Frontier – the process itself was substantially led by the writing.

H: What are the main differences between writing a game and writing something like a novel?

M: There are two main differences: the process and the way the audience responds.

The process of game writing is essentially collaborative – it’s usually interdisciplinary, and taking into account multiple voices that inform on the eventual story – production, art, design, audio, QA, perhaps even other user testing too. For established franchises there are even more voices in this mix.

A novel, even if you co-write it, will usually be far less collaborative, and not cut across so many disciplines.

With a novel you have a fairly good idea of what the audience may be experiencing at any point in the story – assuming they’ve been paying attention and you’ve been doing your job well enough.

With a game you can usually be less sure, because there may be a variety of different paths they’ve taken to get to a given point, and even at that given point they may be presented with different realities, so you’re thinking more in terms of possibilities rather than probabilities of how the story may be shaping up for them, and so what elements you need to try to ensure they experience to help their overall time with the game be as satisfying as possible.

H: You worked on Civilization VI. Were you writing for that? Is the experience of working on a strategy game very different from working on more narrative driven games?

But there may be fewer differences than you might think. Even in many narrative driven games you may – effectively – be trying to figure out how to stitch game design elements together with a narrative coherency that try to sell the idea of the story above the design elements.

H: For games with a historical setting such as Mafia III (set in late 60s USA), do writers generally consult with historians or do all the research for the writing themselves?

M: When I was on Mafia III we were doing the research ourselves, and I know this continued extensively – with a wide range of sources – literature, movies, nonfiction, and other contemporary accounts.

Sometimes studios pay for external historical consultants, although the expense and time means I’ve not heard of this being done very often.

For my own part I’m a big history buff – and recently completed an MA in Global History (at Birmingham University, UK, through distance learning) – so I relish the opportunity to do my own historical research and utilise some of those academic skills I’ve recently been cultivating.

H: Is there a game that you’re particularly proud of being a writer for? If so, what sets that game apart for you?

M: There are three games I’m especially glad to have had the chance to work on.

BTPS [Borderlands: The Pre-Sequel] – and the Claptastic Voyage DLC we did at 2K Australia – was a career high in terms of working with a cohesive team, pulling in the same direction to make a fun contribution to the Borderlands world. In particular working with longtime co-writer Marek Walton (now at Crystal Dynamics) in a world so responsive to idiosyncratic characters and humour was a real delight. We don’t see comedy in games as much as I’d personally like, so the opportunity to tell stories with comedy – with a team I especially liked really set this apart. That the game was so well received given the difficulties we faced in terms of production timescale and resources was also immensely satisfying. 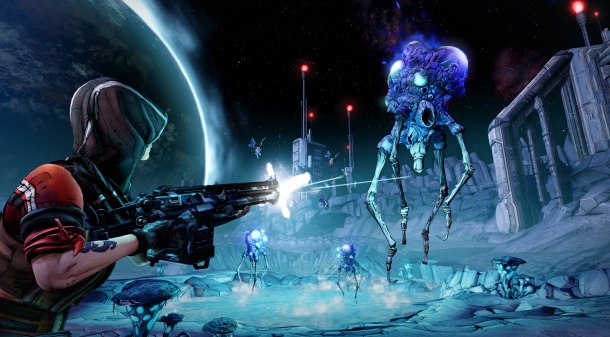 I mentioned POTA: Last Frontier already. Again what was special was the writing team – Neil Richards, Matt Costello, Marek Walton, Dan Meyer, producer/creative director Martin Alltimes, and director Steve Kniebihly – where there was a unified sense of vision – not just a commitment to the story, but also the type of game (or ‘not game’) we were trying to make. I’d always wanted to make this kind of story-led, choice driven multiple endings game, where intricate narrative design structure was the essence of the web of experiences we were trying to enable, so it was exciting to be a part of that and to go deep into how these structures work, giving choices and branches, but controlling the production consequences with careful design.

I’m also working on a game, Lost Words, with Sketchbook Games – working with Rhianna Pratchett, Dan Gabriel, Mark Backler, and others – which I’m really excited about. Again, storytelling is genuinely at the heart of the game experience, and it’s using a game design context to explore the nature of writing and storytelling itself, not as supplemental to the game experience or mere setting, but as central to what the whole game experience is about.

Lost Words is generating a lot of buzz.

I suppose what all three projects have in common is a tightly-knit, unified team, pushing into creatively rich areas with room for us to move to try new things.

H: What advice do you have for people who want to get into writing games?

Use Twine, or Inklewriter, or some other free interactive writing software to create your own stories. It may not be a AAA production, but it’s a start and gets you thinking about some of the ways interactive storytelling works – and gets your stories to an audience.

Maurice’s first game was Driver, in 1999. Since then he’s worked on over 40 published video games, including Borderlands: The Pre-Sequel!, Mafia III, Civilization VI, and the Wii Fit series. He’s worked as a producer, a designer, and a voice director, but most often as a writer. Between 2013 and 2015 he was Narrative Director at 2K Australia. Outside of games he works in TV and fiction, co-writing Alphablocks for BBC TV, and publishing a collection of short stories, Photocopies of Heaven. He holds a PhD in Creative Writing from Newcastle University, England.