I’ve already shared some of my highlights from the recent Canberra Writers Festival. Over the course of that weekend I attended several young adult fiction events, which merited a post of its own. 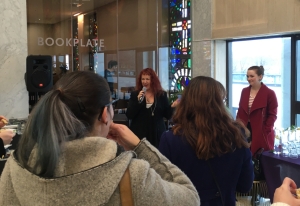 On the Sunday of the festival, I went to a session titled ‘The importance of Australian YA’. Immediately before that, I was at the ACT Writers Centre High Tea, when Writers Centre director Sarah shepherded Isobelle Carmody my way and introduced us. It was that strange and wonderful experience of meeting a childhood hero and finding her just as I’d hoped she would be. Sarah mentioned we had both spent time in Iceland, so Isobelle and I had a great conversation, which saved me from fangirling out.

I vividly remember finishing Obernewtyn when I was around 12. As I read the author bio at the back, I was awed to think that the world in which I had just been immersed had been created by Isobelle, and that she was from Australia. It was part of my realisation that writers were real people and I could be a writer too.

An apt thought to be carrying with me into the National Library of Australia Theatre, where authors Ellie Marney, Jaclyn Moriarity and Will Kostakis discussed the importance of YA.

Not only was the conversation engaging, but it was important. Here’s the thing: YA is struggling. In 2015 The Australian Library and Information Association (ALIA) announced lists of the most borrowed books from libraries across the country. In most categories, Australian books made up a majority. YA was the exception. Only two of the 10 books listed were Australian.

One of the two Australian YA books on the ALIA list was Ellie Marnie’s Every Breath. She still says she has no idea how that happened, although of course she is pleased. It spurred her to work to get more Australian titles on that list, and to raise awareness of Australian YA more broadly. As she says, ‘You’ll never hurt your own career if you help another writer.’

Now there is LoveOzYA, a movement to promote local books. As Will said, ‘If Australian YA doesn’t sell, publishers aren’t going to publish it. Australian publishers are changing with the times and it’s only so long they’ll support local voices compared to those coming in from the larger territories. It’s easier to borrow buzz from another international market than tell people about something new.’

So what is YA really? Different writers have different ideas of what constitutes YA, although all agree that it’s not watered down adult fiction. Nominally, the target audience is teenagers. Teens are a demanding audience that can spot inauthenticity, as all the panellists agreed. But not all readers of young adult are still in their teenage years. Ellie said something like 55% of readers are aged in their 20s and 30s.

In an event a day earlier, Australian YA writer Garth Nix had described the targeted audience age as a threshold or entry point. A book for 12+ means some readers will be 12, but even more will be older than 12. Joining Garth in conversation with Kaaron Warren, British author Samantha Shannon explained that she doesn’t consider her Bone Season books to be YA because the protagonist is 19, yet the booksellers often put them on YA shelves.

Generally YA fiction has a protagonist aged between 15-18 years old, and some coming-of-age themes. Lately, YA has been dominated by dystopian trilogies, like The Hunger Games and Divergent, which are adapted as blockbuster movies. It’s easy to see the scale of the challenge when we consider a bestseller in Australia is a book that sells 10,000 copies. This is a mere drop in the bucket when we consider other larger English-speaking territories such as the US and the UK.

So why is Australian YA important, and what makes it Australian? Jaclyn spoke about writing her book Feeling Sorry for Celia and struggling until she began writing in her own voice. Will recalled trying to set his second novel in a regional area. It wasn’t working and didn’t feel authentic, so he returned to writing about ‘his Australia’ – diversity in urban Australia, drawing on his Greek heritage. Ellie spoke about the importance of being able to place yourself, hear your own vernacular, see familiar landscape around you, and know the street names being talked about in a book. So it’s about stories that speak to the Australian experience.

Books can be life-changing for teenagers (and the rest of us) trying to find their identity – but this is probably also why many YA readers are aged well into their 20s and 30s – because many elements common to YA (a central character at a pivotal point in their life and almost always significant character change) is also what makes for a good story. If you’re a structuralist, think of Joseph Campbell’s ‘The Hero’s Journey’, as exampled by Star Wars and Harry Potter. We love to read characters that undergo journeys (including metaphorical) and moreover, we have all been young adults.

A common problem with art is how we quantify it. YA is successful, but it may not be lucrative for publishers. Its value lies in those things that are difficult to quantify: the way reading a book can be life changing. As Jaclyn said, ‘a 13 year old wrote to me and said, “Whenever I feel sad, I hug one of your books”.’

I left this session feeling inspired by the call to action. If you love Australian YA, tell people. Visit  www.loveausya.com.au, get hash tagging, and get involved with YA book clubs. If you haven’t read Australian YA, then a good way to get a taste is to read the anthology that Ellie, Jaclyn and Will have contributed to: Begin, End, Begin: A #LoveOZYA Anthology.

So, what’s your favourite Australian YA book? How did it change your life?

Isobelle Carmody is in Canberra this month as part of the ACT Writers Centre Eminent Writer-in-Residence program, in partnership with UNSW Canberra with support from Copyright Agency and with the assistance of Ainslie and Gorman Arts Centres and Arts ACT.

Emma Gibson is a writer and performance maker from Canberra, Australia. She writes plays and writes about place. Her previous plays include Johnny Castellano is Mine (Canberra Youth Theatre/Street Theatre), The Pyjama Girl (HotHouse Theatre), Widowbird (The Street Theatre).

Emma has undertaken artist residencies and participated in festivals internationally. Turning recently to prose, Emma has had short pieces published in the Skagastrond Review, Seizure, Iceview, and an anthology written in the sands of the Sahara Desert. She’s previously contributed to Broadway Baby, BMA and Lip Mag. Emma has created a site-specific poetry installation in Spain, helped run an artist residency in remote Iceland, reviewed 100 shows at Edinburgh Fringe, and made an audio walking tour around Garema Place for Canberra’s You Are Here Festival. She is currently studying a Masters of Creative Writing (Place Writing) with Manchester Metropolitan University.

Emma is participating in the 2017 ACT Lit-Bloggers of the Future program, which is an initiative of the ACT Writers Centre in collaboration with the National Library of Australia. Participants are mentored by Sue Terry of Whispering Gums.