A few years ago I spent a lot of time looking for writing tips to use in one of my short stories called, “Seventeen Rules for Writing a Short Story.” One thing I discovered is that just about every writer who has ever lived has some advice to give on writing, and that it’s very rare for any two writers to give the same advice. In fact, most of the time they contradict each other. At the risk of adding to the confusion, I’d like to offer my own suggestions to help in writing a short story. However, it should be borne in mine that any writing tips, whether from Kurt Vonnegut or Dan Brown, may best be taken with a pinch of salt because what worked for them (and me) might not work for you.

I have a theory that it is impossible to write a decent short story unless you have read a lot of great short stories. Try to read as many short stories as you can, and not only from contemporary writers. Read Poe, Maupassant, James, Chekhov, Carver, Mansfield, Borges, Woolf, Kipling, Barth, Salter, O’Connor (Frank and Flannery), Salinger, Yates, Jolley and Greene. These men and women are the greatest teachers a short story writer can have. You’ll learn all you need to know about structure, characterisation, setting, plot and everything else, and you’ll also have a great time. With any luck, something of their stories will stay with you when you write your own.

The most important thing to do is to get the first draft down. It doesn’t matter if it’s terrible. All first drafts are terrible, more or less. There will be plenty of time to fix problems later. (See tip no. 5.) Don’t fall into the trap of endlessly writing and rewriting the first paragraph, and never progressing any further. Even if you think it’s awful, hold your breath, grimace, and write on. A dreadful first draft can become a great story. An unfinished draft can’t become anything.

You may have started a story to explore a certain theme, or had a fantastic idea for a certain scene, or to showcase a great character. But stories can grow in unexpected ways, and though you may think that this scene, or theme, or character is absolutely essential, it may not be. Sometimes there are parts of a story, no matter how well written, that become redundant as the story is redrafted. You may be convinced that a particular scene is critical to your story, but if you are stuck, try taking it out. Paradoxically, when you remove good writing from a story, it can, on occasion, make the story even better.

This piece first appeared on Black Inc Books Blog. You can purchase a copy of Their Brilliant Careers here. 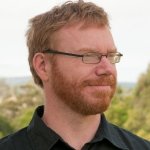 Ryan O’Neill is the author of The Weight of a Human Heart. He was born in Glasgow in 1975 and has lived in Africa, Europe and Asia before settling in Newcastle, Australia, with his wife and two daughters. His fiction has appeared in The Best Australian Stories, The Sleepers Almanac, Meanjin, New Australian Stories, Wet Ink, Etchings and Westerly. His work has won the Hal Porter and Roland Robinson awards and been shortlisted for the Queensland Premier’s Steele Rudd Award and the Age Short-Story Prize. He teaches at the University of Newcastle.