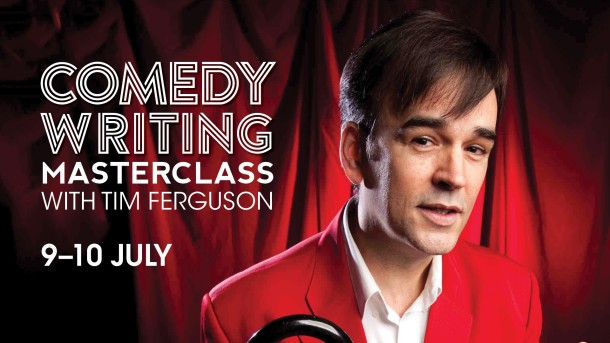 Can you tell us briefly about your writing and performing career?

I just made Spin Out, a fun romantic-comedy movie about a B&S Ball. It hits screens Sept 15. I hope people enjoy it!

Who makes you laugh the most?

I’m a big fan of Sam Simmons, Greg Fleet and Zoe Coombs Marr. Artful nonsense gets me every time. Non sequiturs, curlicues, things that don’t make sense… Bafflement can be a state of bliss.

I love seeing comics and writers startle. When they see a new way of creating comedy, it’s like discovering the secret of a magic trick. I love seeing people who’ve never written a joke realise ‘OMG! I can do this!’. And, it’s great watching a comedian marvel at new recipes for comedy.

What would you say to a writer who is convinced that they are just unfunny? Can this change?

Anyone can learn this craft! Comedy is a craft—not a mysterious art. Like Drama, its principles can be learnt and practiced. Some principles are simple—“The punchline goes at the end”. Some are more delicate—“A comic character is a distilled character”.

Drama is half Tragedy, half Comedy. If you’re any kind of writer, you need to know this stuff. And, like pottery or dancing, you will master its simple principles by practicing.

Best of all, writing comedy gives you a reliable income. There’s less competition because most writers are too chicken to even look at it. If only they knew how it works…

You are teaching a comedy writing masterclass at the Canberra Theatre on 9–11 July, which you are kindly giving to ACT Writers members at a discount price. What can participants expect from this course?

Standup, sitcoms, movies, sketches, short films, webisodes… Whatever you’re writing, my principles can save you years of trial and error. Seriously.

Everything you can imagine can be made funny for a world audience. Everyone looks at comedy. I show people how to see it. And, we laugh a lot!