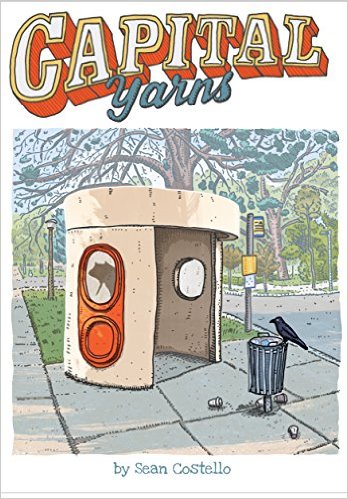 I was in Harry Hartog’s in Woden the other day when I came across something unusual on the counter. Neatly folded in a cardboard stand was a stack of short stories, each for the spare change price of two dollars. The intriguing stories—part of the Capital Yarns series—were not only set in Canberra but, to my surprise and delight, the author also gave the proceeds to local charities.

I contacted the man behind the yarns, Sean Costello, to find out more.

What is Capital Yarns?

Beginning as a website, Capital Yarns is probably now best described as a brand, under which I invite readers to nominate three items to feature in a short story set in Canberra. Stories are published for the first time on the site, but there are now also podcasts, a compilation book, and individual ‘zine’ publications [being the short stories I saw in Harry Hartog’s, also available in other locations* – MCL].

How did it all start?

I wanted to find a way to commit to writing creatively on a regular basis. When my children were younger, I would tell them short bedtime stories based on three items they nominated. The deal was that the story had to feature all three items. It seemed a good idea to use that concept more broadly, and in doing so, commit myself to writing. So I have my children’s poor sleep habits to thank really!

How can we get involved?

The bulk of the stories are free to read at www.capitalyarns.com.au. You can request a story by nominating three items via the site, Twitter (@capitalyarns), Facebook (Capital Yarns), Google+(Sean Costello).

You mentioned a compilation book. Can you tell us a little more about that?

I decided to publish a Capital Yarns compilation after people told me reading the stories on a computer was a challenge, and it wasn’t the best way to curl up with a story. I crowd funded the book through Pozible, and was lucky enough to reach my modest target after receiving some great coverage from local media including The Canberra Times, Canberra Weekly, HerCanberra and RiotAct.

There are 15 yarns in the book, accompanied by some fantastic photographs of Canberra (largely donated by local photographers). It was also printed in Fyshwick, so it’s pretty Canberran!

The book is available from a range of retailers around the city**, and the e-book version is available to buy through local publisher Editia (who have been really supportive of Capital Yarns) and Amazon.

The book’s front cover—that unmistakeable Canberra bus shelter—really stands out on the shelf. What is the story behind that?

Trevor Dickinson, who does those quintessential illustrations of places like the Shine Dome and Black Mountain Tower, designed the awesome cover.  We chose to use the iconic old bus shelter image, and it was later pointed out to me that I had written a short story about a bus shelter that was eerily similar to the one in the image—right down to the same broken window.

How did you progress to publishing your short stories in ‘zine’ format?

Some friends from my kids’ school are part of the Canberra Zine Emporium, and after chatting to them a zine version of the stories just made sense. I was looking for an opportunity to give something back to the community after all the generosity around the book, so publishing these and donating the profits to charity seemed a good way to go.

It sounds as though Canberra has really gotten behind Capital Yarns.

I’ve been struck about how supportive the Canberra community has been. Whether it is local publishers like Editia offering advice and support, local photographers like Martin Ollman, Travis Longmore (and my wife Melanie Skinner) providing images for the book, friends and family helping out with layout, design and crowd funding or the social and traditional media community giving it a plug, I feel very grateful. Senator Katy Gallagher was kind enough to officially launch the book, which also provided me an opportunity to thank all the people that contributed their time and money to make it happen!

The Writers Centre has also been wonderfully supportive. I was lucky enough to receive a highly commended in last year’s Publishing Awards for the book, which again gave me some much-needed confidence about my writing. The Centre is such a wonderful repository of all that is happening both locally and nationally for all forms of writing.

You have a great website and your stories engage the online community. What tips can you give for writers seeking to improve their online engagement?

With my particular style, in many ways I rely on social media to inspire my writing. The immediacy of someone responding to the short story I’ve written based on their items is really exciting. That said, there is often a scary period between when I post the story and when they reply!

But I think I still have plenty to learn in this area. I tend to fall into the trap of broadcasting or promoting on social media, rather than truly engaging. So my advice would be to share, share, share and respond to others as they respond to you and try to engage with others as much as you can.

What else are you working on?

I’ve been working on a novel for a long time now, even before Capital Yarns. The working title is Capital, and it explores how an act of terrorism by a lonely and desperate Muslim man is acutely felt by two families. Both are at the margins of Australian society, but for very different reasons.

The idea came to be when I was living in Scotland and I found myself a little homesick for Canberra. I felt that so much of Canberra was untapped and misunderstood, so much of the national attention is centred on that big flag pole on the Hill, and even then, so much of the way the bureaucracy and broader community rotates around it is misunderstood. That was probably the genesis of both Capital Yarns and the novel.

* Capital Yarn zines are available from Harry Hartog Woden, the Handmade Markets in the city, and the National Library of Australia bookshop.

** The Capital Yarns compendium is available in print from retailers such as Paperchain, National Library of Australia bookshop, The Curatoreum at the National Portrait Gallery, National Museum of Australia Shop, Dymocks Canberra Centre, Parliament Shop, National Gallery of Australia shop, Muse at East Hotel, Handmade Markets shop in the city, and Harry Hartog Woden or as an e-book from Editia or Amazon. 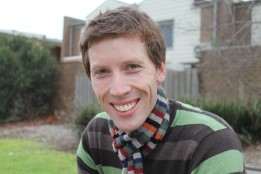 Matthew C Lamb writes crime and other genre fiction, the adventurous stuff he’d like to read. He also blogs about writing and storytelling at www.matthewclamb.com, and has trouble saying no to a good blockbuster movie (when his parenting responsibilities permit). His other desk is in a public service building somewhere, working in law enforcement and national security. Enough fuel for a lifetime’s stories…

One thought on “The man behind the Yarns: an interview with Capital Yarns author Sean Costello”