Blogger in Residence, Christine McPaul, caught up with Angela Meyer of LiteraryMinded to find out about her experience as an author, editor and blogger. 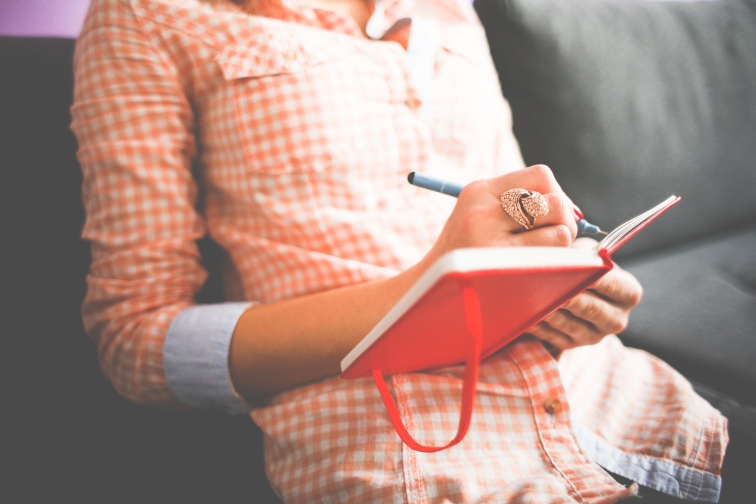 If there was a single word to describe your writing journey what would that be?

Intertextual. I am/my work is completely the product of every text I’ve absorbed.

It would have been a review in Books+Publishing magazine, but more exciting was my first short story publication – though I can’t remember if it was the one in Hecate or Lip Magazine! I remember the room I was in. I remember the feeling of overwhelming joy bubbling up and the way I exclaimed out loud. I guess I was about 21. Every time I have a story accepted it still feels that good. Sometimes there are a lot of rejections in between. But I’m also lucky enough to have gotten to a point where I am now sometimes asked to contribute to a publication.

Were there any significant mentors/supporters who really assisted you when you were starting out?

Yes. Growing up in regional Australia it was a bit different to where I now live in Melbourne. My Oma used to write and encouraged me early, so did a few influential teachers. But Peter Bishop is someone who really saw something in my work as an adult, before many people did, in my early 20s. Peter was the director of Varuna Writers Centre in the Blue Mountains, and has nurtured many great writers. He read my first novel manuscript when he was travelling around to regional places, meeting with writers, and he gave me the feedback I needed (basically, it’s not great, but keep writing). Then, along with a panel, he chose my next manuscript for a residency at Varuna. We had some great and very real conversations about life, writing, and death. I’ll never forget it. I had come from a place where I felt a little starved, to be honest, of intellectual or philosophical (or even just honest, or raw) conversation, not to mention conversations that go deep into ideas of story, character, literary style, and what it even means to be a writer. That manuscript was unpublishable, too, in the end, but it was absolutely worth writing and working on because I learnt so much about my own concerns as a writer and I was on my way to finding better ways to express them, thanks to Peter’s encouragement, and then many others once I landed in Melbourne.

How did that first publication influence your writing career?

I wouldn’t say the short story had much impact on my ‘career’ as a writer, but it was an encouragement to keep writing them. But the first review – that certainly kicked off a whole, completely unexpected career as a book blogger and professional reviewer, which led to work also as a book industry journalist, and frequent festival chair, and eventually contributed to the range of experience which got me my current job in publishing.

If you could have your time as a writer over again, what would you do differently?

You’ve been asked to conduct a workshop for the ACT Writers Centre. In what ways do you think your workshop will benefit emerging writers?

I’m conducting TWO workshops! And both are aimed at inspiring emerging writers and giving them some mad skillz. I’ve been teaching ‘flash fiction’ for a while, as my book, Captives, is a collection of these tiny stories. I really enjoy introducing students to this small, satisfying form. At the end of the day they’ll even have completed a story or two!

My ‘reading to write’ workshop is very close to my heart. There’s no way my writing would have improved so much over the past ten years if I hadn’t also been such a voracious reader, and someone who had to ‘close read’ books for review, for study, for competition judging, and in my work now as an editor. I will encourage the students in this workshop to see their joyous reading time as something that can also be helpful in their development as writers. (And you get to spend time in the workshop banging on about your favourite book, which is always fun.)

Is there any general advice you can give emerging writers?

Others have said it before me, and better than me, but just read a lot and write a lot. Be dedicated. Love it. And go to those places you fear going to. Your writing will be better for it.

If you haven’t already registered for one of Angela Meyer’s workshops you can do that here.

Christine McPaul is a member of the HARDCOPY 2014 alumni, and is also a founding editor of the e-journal, Softcopy, launched in May 2015. Christine has written shortlisted fiction, published academic articles about literature and women’s writing, book reviews, and a biography for the Australian Dictionary of Biography. Christine was awarded a PhD from the Literature and Theatre Studies Department of the Australian National University in 2009. She tweets @christinemcpaul and muses about writing, reading, and finding that illusive inspiration on her blog, Capable of Anything.