A few weeks ago, we heard rumblings about a 52 Week Illustration Challenge, and then lovely drawings started popping up on Facebook. We had to learn more. The brainchild behind this endeavour is Canberra’s own Tania McCartney. ACTWC intern, Sophie Lovell, recently interviewed Tania about this project. Their conversation is below. 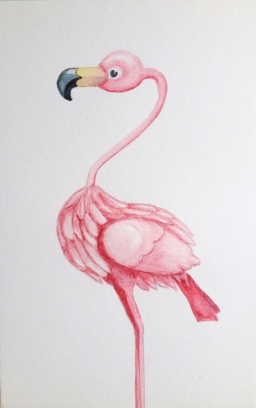 ACTWC:  The 52-Week Illustration Challenge seems like quite the undertaking!  What was the inspiration behind the project?

Tania McCartney: The 52-Week Illustration Challenge began as a very personal project—a self-challenge to rediscover and hone my illustration skills. It was also for enjoyment and to open myself to even deeper creative levels. I’ve been writing for decades yet only recently felt a strong pull to return to illustrating—something I absolutely loved during school. I’ll never know why, but I all gave up on art in my mid-twenties, and it’s not until recently that I realised how much I missed it. Maybe it’s all those beautiful children’s picture books and graphic design books I’ve become obsessed with in adulthood! Since entering the children’s book industry in 2008, and founding Kids’ Book Review, my adoration for great children’s book art has exploded, and so part of this challenge is centred in my dream to illustrate one of my own children’s books. This is a humbling thing to say as I’ve worked with such talented, established illustrators so far, and I feel like I’m starting from the very bottom of the pile!

ACT: How is the Challenge going so far?

Tania: I’m stunned with how well it’s going. I honestly thought this Challenge would be me, two author/illustrator friends and maybe the odd ring-in. I never even dreamed it would grow so quickly and so many people would want to join in. It feels amazing to be creative, but it also feels amazing to witness the joy and creative expression of people who’ve joined the group—many of whom write to thank me for re-igniting their artistic passion. It’s brought tears to my eyes, I’ve been so touched. I’m also enormously enjoying the art! It’s a thrill to scroll through the Facebook page (people are also playing on Twitter and Instagram) and see incredible artwork, set to my own weekly themes. It feels like Christmas every day and I feel so honoured and delighted to witness these creations. I must admit, I have one eye on several people for future book collaborations, as do several publishers I know! So this group has turned into an opportunity as well as a fun place to be.

ACTWC: Quite a lot of people have signed up.  What do you think draws people to this challenge, and how involved is the community around the challenge?

Tania: Our Facebook group is currently at 700 members, with dozens more joining each week. They’re from all over the world, all ages (the youngest has been 3) and of varying skill. Some are professional artists, some are long-lost or latent artists (like me), and some are simply curious and want to enjoy what everyone else is doing. There are also a handful of people posting creative photographs as opposed to drawings, and renowned children’s author Sally Murphy is posting a poem each week, to match the theme. The mediums also vary, from watercolour to ink, collaging to sculpting. Illustration takes so very many forms, it feels wonderful to allow full expression of medium.

There is such an incredible sense of community in the group. Although the rules are loose and the monitoring is loose, I do keep an eye on the dynamics between participants, and this has helped foster a warm, supportive group. The bustling, creative, community feel is palpable, even though it’s a virtual group. There are also many industry players—many I know and some I don’t know—who’ve joined in. It’s just so much fun. It feels like home.

ACTWC: Each week the Challenge follows a theme, such as ‘Caravan’, ‘Eggs’ and ‘Watercolour’.  How did you come up with the themes for each week? 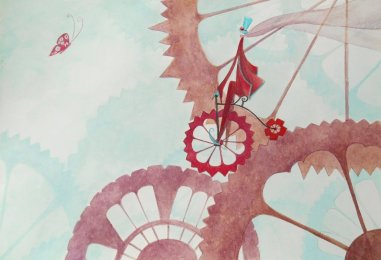 Tania: It was a bit of a stream of consciousness thing—I just wrote them out, and, admittedly, thought up themes I would personally love to draw. One of the Facebook members later pointed out that I’d repeated two entries, so I had to think up two more, but I made sure they were things that challenged me personally (it’s great to sit outside the comfort zone). I remember when the group panicked over the themes of ‘selfie’ and ‘machinery’. Honestly, the results were some of the best artworks yet.

ACTWC: What advice would you give someone wanting to develop their creative skills, for both illustration and, and as an author of children’s books, writing?

Tania: My advice comes from the ancient Greek Goddess of Victory, Nike – ‘Just Do It’. Seriously. Just do it. Lots. Like anything, practise makes perfect and I’m still reeling at how quickly my illustration skills have developed with a simple weekly challenge. Seek out ways to Do. Study. Contribute. Maybe set your own weekly (or daily) challenge and stick to it, no matter what. The secret is in the doing. When a creative project begins, it has a certain magical quality that takes on a life of its own. It’s like when I’m writing long texts, like my current junior fiction novel—if I avoid it, it stagnates. If I just throw myself in and work on it, things unfold in the most organic way—and then opportunities begin to appear, the right people appear, the right answers unfold. There’s so much magic in Doing.

ACTWC: What other projects do you have in the works?

Tania: This year is kind of like one enormous project for me. It’s about immersing more deeply—both in writing and in illustrating. I’m about to go into picture book production with my fabulous illustrator partner Tina Snerling. This will be our third book together in just 12 months (titled Peas in a Pod). I’m also, secretly (until now!) digitally illustrating one of my picture book manuscripts. The script is yet to be accepted for publication, but I’m using it as a ‘tool’ to practise my book-creating skills in a visual sense. I’m also spending the first half of the year running Kids’ Book Review’s Fourth Unpublished Picture Book Award, which is an enormous annual project, and there are several literacy projects I’ll work on, including ideas for the brand new SCBWI ACT group and a local ACT chapter of Love2Read. My last intended project is to begin work on a couple of adult book ideas—but I think I have enough to keep me busy for now!

See the 52-Week Illlustration Challenge Facebook Group at https://www.facebook.com/groups/418616991575037/. If you would like to participate, all you need do is request to join. You can also play via Twitter and Instagram, using hashtag #illo52weeks. Learn more about Tania’s work at www.taniamccartney.com and www.kids-bookreview.com.