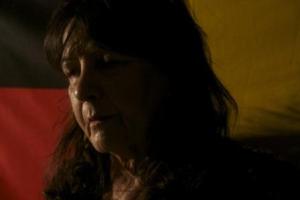 Kerry Reed-Gilbert is a Wiradjuri woman from Central NSW. Kerry is a multi-disciplinary artist she is a known poet and writer within the Aboriginal and non-Aboriginal world of writers, poets and playwrights.

ACTWC: At what age did you begin writing, and what did you write?

Kerry: I think like all of us we all thought we were budding poets and writers at a very early age. I remember writing when I was young but time, opportunity and a big family especially if you’re the youngest can put a damper on you writing that collection of works or that best seller.

ACTWC: A book or poem you often return to is…

K: I have lots of favourites so that’s really hard Oodgeroo Noonuccal (Kath Walker), Jack Davis and my father, Kevin Gilbert. I should tell you that I like the work of Edgar Allan Poe as well.

K: I’m a part time poet/writer and like all of us when I have time and energy I’m gonna write that best seller.

ACTWC: If you we’re offered a brunch with T.S. Eliot or Margaret Atwood, which acquaintance would you opt for, and why?

K: That’s a hard one either one will do for me – it would be deadly, they are both pretty majic to me.

ACTWC: Tell us about your career highlight to date.

K: I’ve been very lucky in 2006 I was awarded by the International Society of Poets with an ‘Outstanding Achievement in Poetry’ award and a ‘Poet of Merit’ Award. In 2005 I toured Aotearoa, New Zealand as part of the Honouring Words 3rd International Indigenous Authors Celebration Tour. In 2003 I was awarded an International Residence from the Aboriginal and Torres Strait Islander Arts Board (ATSIAB) to attend Art Omi, Hudson River Valley New York, USA. And in 1997 I toured South Africa as a performance poet performing in ‘ECHOES’ a national tour of the spoken word. I am the Chair for the First Nations Australian Writers Network. I have been pretty lucky with publishing some books as well.

ACTWC: What is the greatest challenge you find yourself facing when writing?

K: Not enough time or space I have a big extended family and 5 wonderful grandchildren and its hard to find a space to write, time to write.